Two days of yard sale selling have me more convinced than ever that we need to think long and hard over every purchase before we make it. We had a decent take, just about $80 for what were essentially two half-days of exceptionally casual salesmanship. But, as anyone who has ever sweltered through one of these things knows, the yard sale is not about the money you bring in so much as it's about the junk you don't have to haul to the dump. And when all was said and done, we were able to pack the left-overs into the station wagon for a single load to the dump swap shop, where no doubt a couple of the items will be picked back up, lived with for a couple of months or years, and then returned.

Plus we had the added pleasure of sitting under a tree for a couple of sunny days and chatting with strangers.

There's something humbling, though, about seeing goods you've accumulated over the years laid bare across a driveway. Particularly after you've hauled lots of this junk from one house to another half a dozen times. Lots of it is chipped, dented, or covered in dust. If it was pristine or at the least well loved, no doubt it wouldn't be shoveled out for sale like this.

We polish it off as well as we can in a couple of minutes, but we don't take any longer, since, after all, we're only asking a dollar or two. Attempts to clean things off stem more from a sense of self-respect than marketing. Because the folks who stop to consider our junk are not approaching it with the discerning shopper's care for the best deal. They're thinking more along the lines of, "Would I really want this object in my house even if it cost nothing at all?"

And as the purveyor or such an object, the yard-saler is thinking, "What does it say about me, that my irregular, oddly numbered set of Ikea flatware and my stack of five year old home decorating magazines can't even fetch a fiver? I've lived with these things for years. Do my memories come so cheap?"

What it really feels like, when many of these customers wander through without making a purchase, is not that they are so interested in scoring a good deal on second hand housewares or jigsaw puzzles with no guarantee on their piece-counts, as in touring a museum of the recent past of an ordinary life. Many of them are gruff, uninterested in chit-chat. "We'd never get stuck with this kind of garbage," their condescending silence seems to say. And some of them hurry away, as if we had stolen their time.

We did make a couple of good connections, though. The sorts of sales that confirmed our tastes as something worthwhile, and that gave hope our discards could live on for some time.

I sold a folding typewriter from the 1910s. The feet had flaked away and the platen seized up, but the woman seemed to appreciate it's value as an historical ornament. (Working, it would have been an amazing artifact, capable of producing documents mechanically with a footprint smaller than a laptop computer. But it didn't work, and I had not looked at it in a year, so its value as an ornament was zero to me.) Gussie sold some sort of howdy-doody doll to an old man who had met the original ventriloquist and was going to give the doll a place of honor in his home. Another fellow scooped up an abacus for a dollar, and announced that he had found the perfect wedding gift for his sister, who was a math teacher.

I purchase very little with the modest allowance that The Wife allows me. This year I bought an e-reader second hand, and half-price, from someone who had ended up with two. I got this computer on Craigslist from a man who pieced it together from parts he got at the dump. Maybe once a month I treat myself to a bottle of scotch. A pair of shoes lasts me two years, at which point the soles have worn through.

I'm a bad, bad American. But part of my problem is this: I've had hoarders in my family. My grandfather filled acres with junk cars and rolls of old carpet; wooden boats which he refused to sell slowly sunk into the soil. 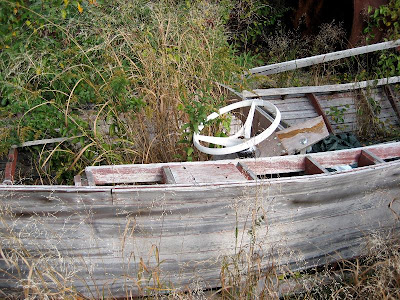 I've probably spent more time throwing away my family's purchases than I've spent making my own.

So that shiny new widget on the department store shelf, with its hard clam-shell packaging and optional two-year service plan, always comes to me with a vision of the future, from so much of the crap I've kept before: a dust-covered relic in a storage unit, no longer worth the rent of its cubic-footage, just waiting to be hauled away at great effort and expense to the yard sale or the dump.  The tragedy inherent in a credit-card swipe is a pile of garbage resting on a mountain of debt.

If we really think about the things we buy, we can minimize this pain. And maybe we can live lives that revolve around people again, instead of things.
Posted by Winston at 9:19 PM