The new version of Ubuntu Linux, 10.04 Lucid Lynx, is now available.  I've been running the previous version on my old MacBook and loving it, so upgrading and seeing what's new seemed like a no-brainer.  I upgraded through the update manager, which handled everything automatically and took about three hours to do it.  Lots of folks like doing a clean install when they upgrade the system, but I spent so much time getting the last version of Ubuntu to play nice with the Macbook that I was hoping to avoid going through all that again.  Happy to report that all went well.

They moved the maximise/minimise buttons over to the left side, Macintosh-style.  Not sure why, but this bugged me enough that I quickly found a way to put them back.

Now there's a little word balloon next to my name that connects me to all of the social networking services.  Since I don't chat, tweet or flickr or digg, it'll go under-utilised.  This should satisfy a lot of folks who are used to being in constant "social networking" contact with their, um, social networks, though.

Booting seems to take a bit longer - a full two minutes.  This is disappointing, but I suspect it's an effect of running on a Macbook with its proprietary hardware.  I might be able to fiddle around and speed this up.  Or I could just embrace a couple of minutes every day to stroke my beard and meditate.  (What's the rush anyhow?)

Once up, though, the system seems to have sped up considerably.   Programs seem to load a lot faster, too, and the latest version of OpenOffice seems to have lost its sluggish edge, that icky sense that I was always typing with a time-delay.  Even editing this blog in Blogger seems smoother, so maybe that lack of blogging software won't really matter.

Lots of new fonts seemed to appear, and there's new icons, a new splash screen for logging in, and a better organised "software center" where I spend way too much time playing with all the available free applications.

Given that I only use computers for writing and a little light image editing, I'm not really sure how I spend so much time messing around with applications, but we all have to have our hobbies, don't we?

So, yeah, if you're using Ubuntu already, set your PC to update overnight.  You won't be amazed but you might find it works a little better than it did before.

If you haven't tried free software out yet, download the latest release of Ubuntu and give it a try.  You'll be surprised how much functionality you can get out of your computer without being tied into a monopolistic operating system.
Posted by Winston at 6:27 PM No comments:

Curious about the machine I typed that last post on?  Here's a video featuring the very model.  (Mine's black, though.)

Frenchwomen, typewriters, and cigarettes -- I really do wish this video went on for hours and hours.  (Although you could give the smoke to something a little more attractive than that Burt Reynolds look-alike.)

Little Flower Petals picked up one of those clicky Model-M style keyboards I've been coveting forever.  She mentioned that the Selectric just isn't the same as the clicky keyboard, and it's not.  It's much louder.  I hope she has the chance to turn one on someday and discover this for herself.  It's a pleasure not to be missed!
Posted by Winston at 9:00 AM No comments:

Found I just couldn't waste this paper, so I typed on it instead. It's all a first draft, appropriate for garbage, but as neat as I could make it. As usual, click on the page for a bigger image. 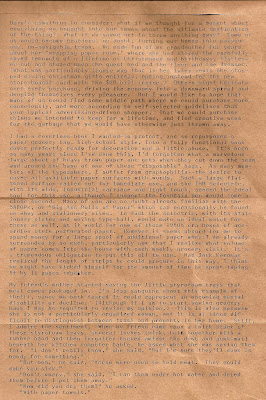 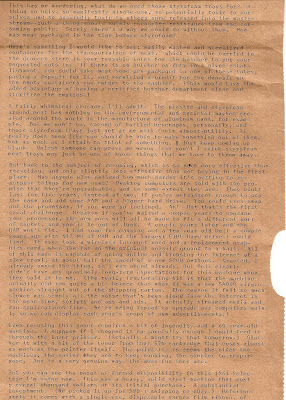 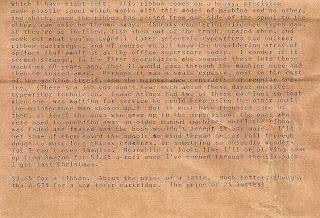 Let me explain what we're looking at here: 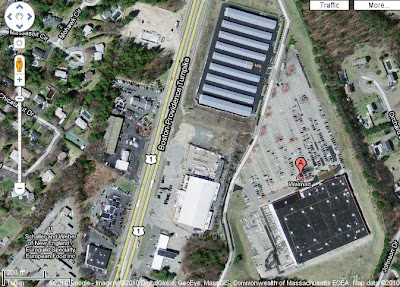 As the little "A" bubble points out, that's a Wal-Mart squatting behind it's mandatory football-field sized parking lot.  What's just 250 feet to the north-north-west of it is a self-storage facility, owned and operated by Wal-Mart.

I never knew such a combination existed until I drove by it today, and I rather hoped it had been a passing nightmare.  Alas, Google maps satellite view shows that I was not asleep at the wheel.

This is bewilderingly, mind-bogglingly efficient.  With one building they sell you more stuff than you can possibly fit in your home.  With the other, they charge you rent to keep it out of the rain.


Is your home already overflowing with crap, but you still can't resist the urge to go shopping?  Never fear!  You can now load up your cart at the world's biggest superstore, wheel it across a parking lot, and stash your new treasures directly in a self-storage facility, without the inconvenience of carrying any of it home.

I wonder if they let any of their sub-poverty level Wal-Mart Associates sleep in there?  It would be cheaper than providing them with health care.

How long do you think it'll be before Wal-Mart convinces congress to privatise municipal dumps?  Then we can wheel our purchases straight from the big-box store to the storage unit to the landfill, and pay them three times for the privilege!
Posted by Winston at 9:27 PM 1 comment:

Editing Out The Ads 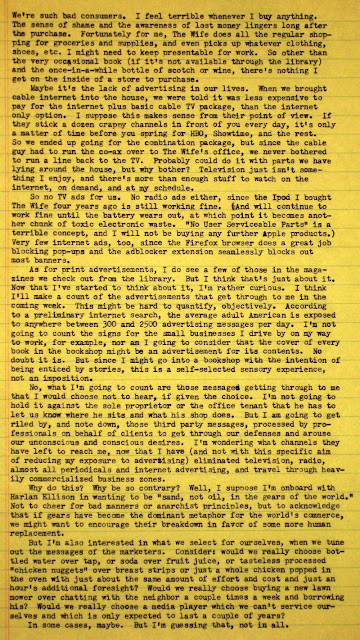 Posted by Winston at 8:32 PM No comments:

Stumbled upon a wonderful documentary about Evgeny Kissin, one of the world's greatest living pianists.  There's a short interview at the beginning, but most of the film is of his historic performance at the Royal Albert Hall, including several encores presented in full.  Here's the first of the 11 part series on youtube:

The Haydn he plays in this documentary is a piece I've been working on for the past five months.  Mine doesn't sound quite the same, but I'll blame my tools and say it's because my piano has not been tuned in years.  (Piano tunings are expensive, and it's something I keep meaning to teach myself to do.)

It's a wonderful time to be interested in classical music, with so many resources available, videos and recordings of just about any piece in the musical canon.  It makes me jealous of kids who are just starting to study piano today.

But here's a question for classical music fans to get all steamed up about: How come that Lady Gaga video with the tape over the nipples and the blurred out crotch has over 20 million views, but this historic performance by one of the greatest living pianists in the world has less than a thousand?

Oh well, I guess it doesn't matter.  I'd rather be one of a small, exclusive audience, than watch Mr. Kissin hook up with Beyonce in an attempt to boost his youtube statistics.
Posted by Winston at 7:53 PM 1 comment:

More Typists Among Us 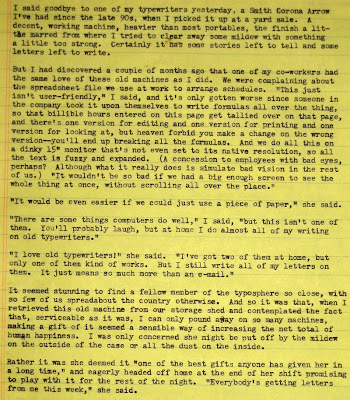 History of Mr. Polly, A Surprisingly Modern Novel from 1910

The History of Mr. Polly, by HG Wells (1910) is a tremendous break from the rest of his oeuvre, being nothing to do with invisible men or Martians or time travel (except in the way that it can transport today's reader back to 1910).  The Wife picked this out for me some dozen years ago at a used book shop and for some reason I got around to it this week.  (I am nothing if not untimely.)

It concerns a Mr. Polly (naturally) who stumbles after happiness making no particular plans, takes no risks, and really has very little success at it throughout, despite the windfall of a life insurance settlement and the opportunity to open his own haberdashery.

It's got decent slapstick humor throughout, and its characters are unique and memorable.  The plotting seemed a bit jerky and uneven, though, and I struggled through the first two thirds of the book with the desire to put it down.  Everyone in the book seemed so damned unlikeable -- the main character most of all.  This isn't a fellow who does things, heavens no.  This is a fellow who things happen to.

I think what kept me going was how shockingly 21st century modern his struggles seemed to be, even with bicycles jockying for space on English streets with horse-drawn carriages.

A fool I was, to have thought that this kind of literary ennui had been invented by the late 20th century post-modernists.  Miserable, passive people have been passive and miserable for 100 years, at least!

The last third of the book picked up and made me downright happy, though.  Without spoiling too much I'll just say that our hero finally makes a couple of choices, and finds the sort of life that today's Vintage Crowd can heartily endorse.  Sort of makes the earlier struggles all worth it, O'man.


You can buy The History of Mr. Polly on Amazon, or get the ebook free from Manybooks.Net.  Hey, it looks like they made a movie from it in 2007, too.  You should probably read the book first, though!
Posted by Winston at 1:00 PM No comments:

The Wife picked me up a typewriter table (on wheels!) at the dump today. 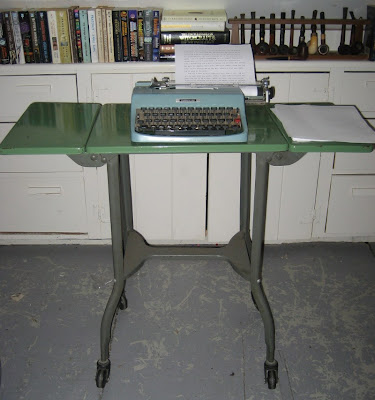 I assiduously avoid the swap shop when we go there, at least on grumpy days like today, when a winter's worth of yard-garbage is waiting for us to clear it out.  I'm always afraid that I might end up loading up with as much junk as we're unloading, and what's the point of that?

But I have to admit this is a pretty good find.  The finish is gleaming, the structure is surprisingly solid and non wobbly (I really thought those wheels would be rolling all over my crooked, 300 year old floor.) and it means I don't have to rearrange my desk when I want to set aside the keyboard and do some proper noisy typing.

She got a new mid-century office chair for herself, too, more comfortable than the one she's been using.  And she found a home for some tacky plastic newfangled mop products our tenants left behind.  (They're crap, but somebody might as well use them before they end up in the landfill.)

Please don't attach too much significance to the books on the shelf.  A lot of those came from the dump as well.  (The pipes, however, were all hand-selected.)

As far as dumps go, we're blessed with a pretty special one.
Posted by Winston at 7:23 PM No comments: