For those of you wondering how many dogs you can comfortably fit on a 34’ trawler, it turns out the answer is…at least four. 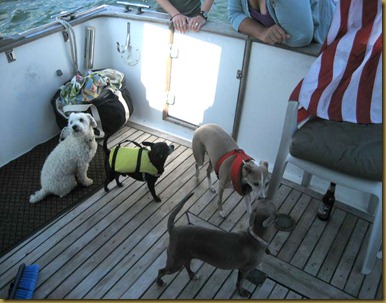 There’s a mother, father, and daughter in that picture, by the way. Plus what you might refer to as a “fuzzy uncle.”

I leave it to the reader to work out which is which.

Back on the Water Again

…if only briefly. (Hopefully more to come in future years.)

Stepdad traded in his sailboat for a smaller trawler, much more to his liking. And I have to say this thing does invite some serious lounging around. 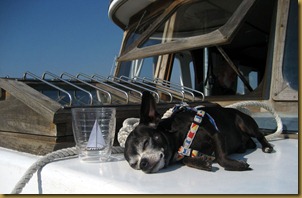 And look at all the room for a typewriter table out here on the back porch. Now I have another excuse for not finishing my novel. I need the proper boat to type it up on!

Seriously, though, the potential for serious, distraction free writing out here is fantastic. What better excuse to steer clear of the distractions of the computer than spotty harbor Wi-Fi and the need to run your generator in order to keep your batteries topped off. The more I think about it, the more I realize there can’t be a writing tool better adapted to ship-life than the manual typewriter.

So long as you keep it well-oiled. The salt can’t be good for it.

Meanwhile, the boat comes with a built-in escape from the terrible winter weather. Why use that expensive tank of fuel to heat your home when you can use it to move your home? 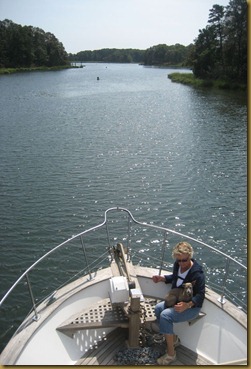 Anyone want to trade a trawler for a drafty old half-cape?
Posted by Winston at 10:09 PM No comments:

We can all agree, I’m sure, that the best distraction-free writing hardware out there is a manual typewriter. However…

After long, careful, and somewhat regretful consideration, I’ve determined that the best word processing software I’ve used over the past decade and a half is Microsoft Word 97.

Marvel as it launches, entire, within microseconds of that second click. Struggle to spot the tiny 50 MB memory footprint. Relax as you discover that it handles novel-length documents without a hiccup. Thrill as you discover the organizational potential of its online layout view. Wonder at what, exactly, software developers have been doing for the past decade and a half to improve on a package that did everything you needed, without complaint.

Granted, it’s proprietary. It’s not open-source. It won’t open the documents your friends and co-workers might email you, since they’ve most likely moved on to pointlessly newer iterations of the office suite. Oh well. Just ask them to dig into their “save as” menu for something more compatible.

Alas! When I think back on the writing tools I’ve tried over the years, only to settle back to this one. But OpenOffice takes a full 20 seconds to launch, consumes eleven times the RAM, requires the Java Runtime Environment, and from what I can tell doesn’t offer me a single additional feature I have any use for. Then there’s AbiWord, the lightweight open-source alternative, but with every machine I’ve ever run that on, the text has flickered as I type. Not only is this distracting, it leaves me with the impression that my words are the merest whispers on a screen, ready to be swept away by the slightest electrical whim. (This is true, of course. But there’s no call for rubbing it in.) Evernote does a nice job of organizing my thoughts, but it invites a bit too much obsessive shuffling around—and there goes my focus. Besides, who really wants to have their every thought and self-indulgent drivel synchronized across internet servers, anyway? That’s what blogging is for! 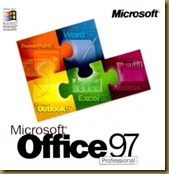 It was on a lark that I popped this old Office 97 disk in when I found it during a deep tidying-up. I thought, “Gosh, this ran just fine on the computer I was using 14 years ago, and I wrote two novels with it. I wonder how well it would work on a Pentium-4 with a dedicated graphics card and dual monitors?” (Yes, I think I’ve officially “maxxed out” the old PC which I bought from the gentleman who recycles pieces he picks up at the dump.) And it turns out that Word 97 launches faster on this computer than Windows 7 Notepad.

It’s funny how hardware and software have been advancing in lockstep, with applications growing bigger and more bloated just as processors grow more powerful and memory more accommodating. Why does it feel as if it takes just as long to get something done on a computer today as it did 15 years ago? This is patently absurd. But the business plan of selling cheap hardware loaded with the latest bloat-ware—thereby making your new computer feel just a little out of date as soon as you’ve turned it on—has been doing a decent job of driving Moore’s Law into the 21st century.

The best operating environment for me these days seems to be a moderately up-to-date PC (four to eight years old) running software from the generation before. Excel 97 launches faster than the Windows Calculator, and has become my go-to tool for summing columns of numbers or performing basic arithmetic. Photoshop 5.5 (from another late 90s install disk) is more than capable of formatting images for blogging and has the capability of handling more professional photo-editing than I’m qualified to perform, and it, too, runs nimbly on a modern, high-definition monitor.

Notable exception: Windows Live Writer, which provides the simplest interface for blogging on any platform. Even Apple doesn’t have anything to compete with it, for love or money. Which is surprising. People have been blogging for over a decade now and only Microsoft has come up with a simple way for them to edit posts locally and then post them to any service. Who would have thought?

The guys from N-Star were working on the street that leads down one side of our property last week, running new line to folks who had been out of power since the storm. There were up in bucket trucks, trimming trees and taking down half-broken limbs.  I felt kind of bad we never even noticed our neighbors had been without power for an entire week.  (We only lost our power  for two hours, not even long enough for me to run down the laptop battery playing FreeCell.  We had the oil lamps and board games and manual typewriters lined up, and everything, but the lights were back on before it even got dark.)

Anyway, a couple of the linemen walked around to our place. I thought they were going to tell us they were disconnecting power for a while so they could work, but actually they just wanted to chat about how old our house was and how old the trees were that they were trimming up. Answer to both: 300 years, more or less. Also, did we suggest they have lunch at the restaurant down the street. Yes. Awfully nice guys. (Or maybe they were just relieved to be talking to someone who hadn’t been without power for a week.)

They told us they’d be leaving all that wood piled up on the edge of our property outside the fence, so we go around and pick it up if we wanted any firewood.

So today I ran the extra-long extension cord over the fence to fire up the electric chainsaw again. The summer-campfire woodpile is all topped off now, probably enough to keep us going for the next three seasons. (The chainsaw needs a little bit of sharpening after all this heavy use, though. Time to ask the step-father for a refresher course in filing it. I know he showed me years ago, when I was much less interested in such things.)

Later we rode our bikes along the canal and to our usual beach, hoping for an end-of-season swim. But the Labrador Current must have been at it again, piping that ice-cold water back down from Greenland, such that standing in the surf for more than 30 seconds makes your ankles ache. Gussie dove all the way in, which surprised me, but she was out again within the minute.

It was a fine afternoon anyway, with a nap on the sand and some people watching. Plus, dogs are allowed on the beach again, post-season, which makes it a more humane place and encourages conversation. Then a stop on the way back at the hot-dog vendor with the thatched umbrella, two for me and one for the wife, and a stop again at the little ice-cream stand that opened up this year, quite conveniently along our bicycling circuit.

Rode home under thickening clouds to spend a couple hours smoking a pipe and reading out on the patio, watching the chickens and listening to the traffic out front crawling its way home from the three-day weekend.

Ha! We were already home! 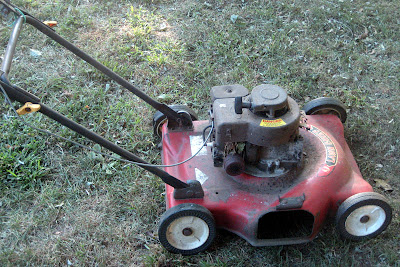 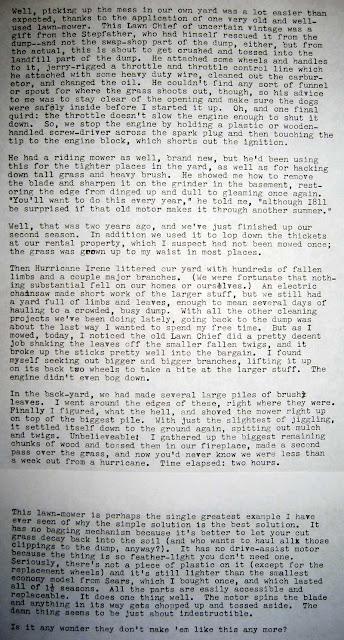 Sadly, I didn't think to get any "before" pictures of the back yard. But this pile from the neighbor's place gives you some idea of what we were dealing with, before we chopped out the larger trunks and stems. 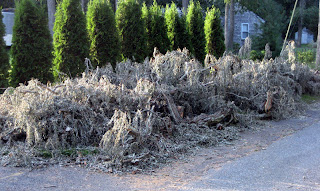 So it's nice, now, to step outside and see this, instead. 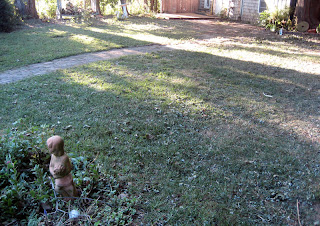 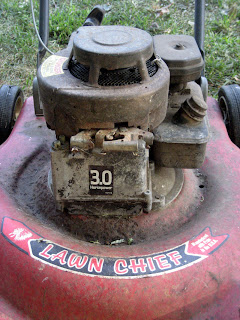 Hey, this guy likes his Chief, too! He's got the 3.5 HP motor, but otherwise it looks like the same machine. I love that the mower has been in his family for "almost 30 years" and is considered an heirloom.
Posted by Winston at 7:00 PM No comments: