So it’s hard to miss that we’re paying $1.50 more per gallon of gas these days then we were a year ago. It’s also hard to miss that, at the grocery store, a package of butter costs a dollar more than it did just a couple of months ago.

So it’s no surprise to read news reports about rising food and fuel prices, or to hear experts say they’re concerned about the chilling effects of such rises on the economy.

What is surprising is to read that core inflation is chugging along at a modest 2%.

Gosh, that hardly seems like anything to worry about.

Until you learn that “core inflation” specifically excludes measures of food and fuel prices.

Um, excuse me, but other than mortgage payments and internet service, food and energy are actually the only things we’ve spent money on this year. I drive to work, then I drive home to a house where I get a nice hot meal in a house that’s heated, hopefully, to a temperature that’s tolerable if I wear long underwear and two sweaters. Ben Bernanke will have to forgive me if I’m not stocking up on iPods and furniture and designer shoes to take advantage of this modest inflation rate.

Anyone else out there get the feeling that our government experts aren’t really acting with the best interest of the citizenry at heart?

Either that, or they simply have no idea what they’re doing.

I’m not sure which is scarier.

When I think about it, it seems like a lot of energy was expended in the second half of the last century trying to get high in one way or another. 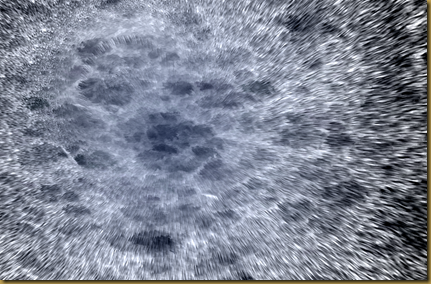 Drugs, literature, art, music. Choose your poison. A lot of it came down to the pursuit of that wow man, far out, sort of experience. Jimi Hendrix playing an electric guitar with his feet, Jackson Pollock splattering canvases with house paint, Philip Glass droning on with his repetitive rhythms and harmonies, Phil K Dick blurring the boundaries between the real and the hallucinatory, movie directors translating those visions to the screen, quantum physicists seeking the cracks in the fundamental laws of nature. 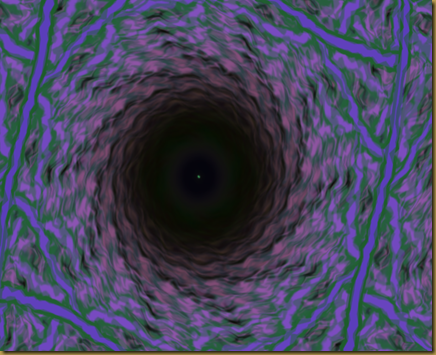 There was this sense that we were constantly on the verge of something fantastic and abstract and mind expanding. Much of the time, this something didn’t seem like it could come from outside, in the world. It was just waiting to burst out from within us, if we could just find a way to give it permission. If only we could nurture our inner child and rub the right crystals and find the reiki practitioner with a light enough touch. 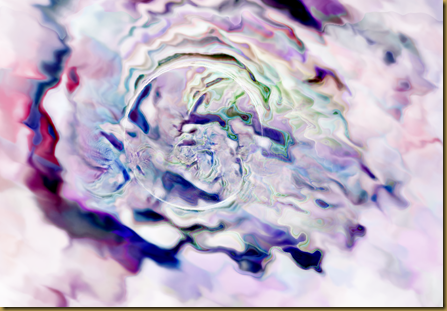 Well, the quest goes on, I suppose. Because, well, let’s face it: if we find these moments at all, they never last. That’s why the addict always needs another hit, and why yesterday’s paintings don’t evoke the same response the second or third time we’ve seen them. 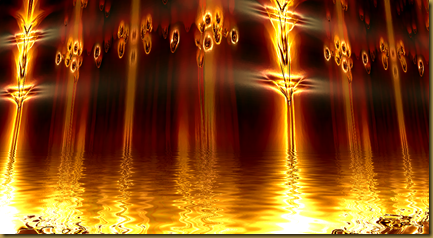 Fortunately, there is this: the portals into these sorts of experiences seem to be everywhere now, and most of them are a good deal safer than the pills and needles so many resorted to in the past.

I just lost a couple of hours messing around with a few free gizmos on my PC which I hadn’t even been aware I had.  I’ve long used Winamp, for example—it’s a far superior media player to the toxic ITunes disaster that Apple foists on the world—and I’ve used it to rip, play, and organize my audio files for years. I just hadn’t bothered to click on the little “Visualizations” button before. Which, in a moment of idleness, I did today. 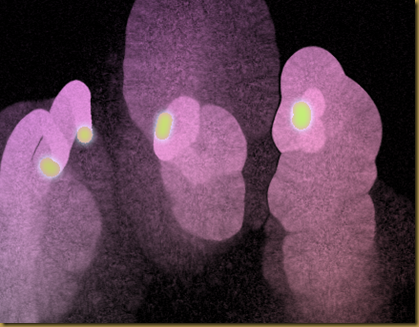 At which point these images you’ve seen here started cascading across my monitor, in full high definition, at a rather dizzying 30 frames per second, and pulsing and dancing in sync with the music. Screen edges crumpled, vortices spun, fireworks launched, fractal ferns swayed, clouds and stars fought for dominion of the moon.

It helped that I was listening to Ludovico Einaudi, who tends to be fairly meditative and soothing. But the program transformed my easy listening background music into something utterly captivating. 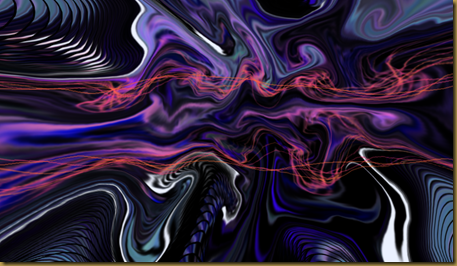 And I thought, hell, any one of these frames puts to shame anything Jackson Pollock ever threw against a canvas. The Evernote screen capture utility did a nice job catching a few of the stills, since I had the odd compulsion to grab some of this stuff that was being generated on the fly. But after a few minutes of doing that I just sat back and listened to the entire two-disc album.

Far out, man. The things I’ve seen. And it’s nice that I didn’t have to drop acid or otherwise put my neurochemistry at risk to do it. William Burroughs should have been so lucky.

We get this letter from our insurance company. They say they haven’t received payment for this year’s premium, and our policy is going to be cancelled in a couple of weeks.

It takes some time to get through to an operator, since none of the menu selections have anything to do with escrow or insurance payments. But hitting zero enough times finally gets me a live one, who offers to transfer me. Only he comes back on the line after five minutes of hold time to say that the escrow department is backed up right now, so why doesn’t he give me their phone number so I can call them later directly?

Reasonable enough. Instead of being put on hold, I’m prompted for my account number. I have a mortgage statement in front of me, so I punch it in.

Only the system won’t accept my number. “This number cannot be verified. Please try again.” So I do.

This turns out to be a very tight, closed loop. There are no options, except for entering the account number again. But even though I’m looking at the account number on my statement, apparently I don’t have an account. At one point, a voice suggests I make sure to enter all leading zeros, but I’ve been doing that all along.

Pressing zero doesn’t work, and neither does speaking the word “operator.” I’m not sure why it would, since there have been no suggestions that this is a voice-activated system. Regardless, I’m so frustrated at this point that I swear, at the top of my lungs, into the cell phone. And I’m in the middle of a rather long string of uncharacteristically vile words (many of which I haven’t used since my sheet-rocking days) when an operator comes on the line.

I had read that some telephone systems had been programmed to register stress and anger in a caller’s voice, but I’ve never encountered it before. And I actually felt a little embarrassed. The operator has a hard to understand Indian accent, but however I feel about outsourcing, she doesn’t deserve to listen to that. She seems very eager to help, though, and apologizes multiple times when it takes her a few seconds to locate my information.

She authorizes a payment to my insurance company and confirms they have the correct account number. “Just give it a few days for the payment to go through,” she says.

Only today we have another letter saying the insurance is being terminated—today—because they still haven’t received the payment. So I try calling the mortgage company again, and get in the same account number loop. This time I only try twice before launching into my vulgar tirade.

And the woman says, “If you have to call again, don’t enter the final digit of your account number. Skip anything after the dash.”

“It doesn’t matter,” she says. “Just skip the final number and press pound.”

Anyway, it’s all straightened out. Probably. The check cleared after the final warning letter was sent.

But what really gets me here are three things. First of all, how is your average caller supposed to know not to punch in part of his account number?

Second, When we were approved for this mortgage, it was about eight years ago. We used a local bank, who actually did the full-on credit check, employment verification, etc. We had a local mortgage officer we’d dealt with on two previous deals, and we frequently called her up with questions and received excellent service. Then, as the world proceeded to go crazy, our mortgage was sold four times before landing with Citi Mortgage, a corporation we would never have borrowed from. Each time our note was sold, we went through a nightmare trying to get the escrow department of each new bank to connect with our insurance companies and our municipal tax collectors. It was demeaning and unnecessary.

Finally, and most importantly, what does it mean that the only way to receive service from a massive corporation (and one which holds a great deal of power over you) is to scream profanities into a telephone? It just seems like another failure of decency in culture, when the system demands you act like an asshole in order to be treated like a human being.

I’ve been reading a lot less fiction these days. Books about reality have gotten more interesting. Or maybe my tastes have changed as I’ve gotten older. Or maybe the world has gotten scary enough that we don’t need horror novels to give us a thrill any more. In fact, the sorts of fiction that always fascinated me in the past have, today, come true.

Today’s Internet, with its MMORPGs and virtual economies and cyber-warfare, is more strange and fascinating than anything William Gibson predicted in the 1980s. If you disagree, you know nothing about piloting predator drones from halfway around the world.

Likewise, the heroes and villains of cyberspace show complexities and transformations that a novelist would be hard-pressed to invent. It’s strange to find yourself rooting for an identity fraudster even as he’s draining your accounts.

Let’s think about the other side of the speculative-fiction spectrum: Fantasy. You’ve got knights, you’ve got pirates, you’ve got wizards. All right, fine. But how many of those pooftas could actually found a colony in a nation of “savages?” And how many novels could convey the desperate tragedy involved in such a triumph?

The Wordy Shipmates does a nice job, too, of treating with the complex and gloomy world-view of Massachusetts Bay Colony’s Puritans. And for such gloomy subjects, they’re treated with a great deal of humor.

Here’s something that gets at the darker side of one of our newly beloved (or loathed—pick your side) folk-heroes:

Julian Assange—who knew he could be a real dick to his friends? Well, his friends know, apparently. But that hair, that style, that reckless abandon…I’m still inclined to like him, even if I wouldn’t invite him to my house.

All right, let’s finish this survey off with an optimist who thinks the future is going to be indistinguishable from magic.

No, not Arthur Clarke, who actually coined that term, but a real live physicist who starts his book by saying we can find hints about the future by talking to real scientists instead of science fiction writers, and then cites Vernor Vinge regarding artificial intelligence and Isaac Asimov on robots, and winds it all up with potential doorways into parallel universes.

All of this has me wondering. Do we really need  to escape into fantasy and the supernatural to tell meaningful stories and to entertain? Is there not enough wonder in the real world to enchant the reader? Or is it, perhaps, that the real world is so overwhelmingly wondrous (not to mention monstrous) that "nonfiction" fulfills the role even better? Wired and Scientific American seem to contain more miracles than the average mind can comprehend, and the newsstand prints more drama and conflict than you can get out of a season of high-octane TV.