This is what August is supposed to feel like.

Enough of that pre-autumn, that cool breeze, that chill. If I'd wanted to be reminded of impending Winter I'd have spent the Springtime in Australia.

Lazy hazy days with a great excuse for jumping into the pond. Sitting still and sweating. Watching smoke rise vertically from a pipe. Dogs passed out in the sun like a couple of solar panels, soaking it up.

I got my run in before 10 AM this morning, 4.5 miles, facing down the rising sun on the power lines. Flushed and glowing like a furnace. I'm used to sweating through my shirt, but I think this is the first time I've ever sweat through my shorts.

And gosh did it feel great.

Man, I have got to move someplace warmer.

I've got about two months to figure out where, and how.

Gosh, there’s a lot of great musical performance available on YouTube, isn’t there?

If you’d told me there was a classical orchestra performing the hyper-kinetic electronic work of Aphix Twin, I would have said it couldn’t be done and probably shouldn’t.

But hot damn, if this isn’t the most fun I’ve ever had watching an orchestra.

There’s several great performances of this orchestra, Alarm Will Sound, posted to Youtube. I know, because I just lost a few pleasant hours to them.

If you feel compelled to explore more Aphix Twin, start with Drukqs. There’s some great fusion of electronic and traditional sounds in that album, and it’s the work I keep going back to as I try to explore his other stuff and discover it might just be a little too hardcore for these innocent ears.

Posted by Winston at 8:33 PM No comments:

You know, I rather wanted to like the Windows 8 interface. Maybe it's just because I can't resist tinkering with new gadgets. Or maybe it's just stubbornness. I've got no love for Microsoft, but after seeing how much hate was poured on this new OS I just felt compelled to give it a chance.

I needed a new laptop so I got one with a touchscreen. I'd read that for Windows 8 to be tolerable, you'd need one. And Lenovo had one that wasn't more expensive than the comparable non-touchscreen models.

After a couple of hours of playing with the "modern" or "metro" or whatever-they-call-it interface I had a pretty good idea what Microsoft was going for with it. This is a super-minimal interface, insisting on childlike simplicity. Controls are tucked off the edge of the screen as "charms", and the nature of these charms are unified between applications. Rather than creating a unified experience, though, it's just confusing. Tapping the "settings" charm for one app isn't going to bring up the same menu as another, and I'm still not clear on when it's supposed to bring up system-wide settings instead.

The layout does seem rather over-simplistic for a large laptop screen (as opposed to, say, the phones they're trying to unify with). But at the same time I'm one for reducing distractions whenever possible. So I kind-of liked the zen, one thing at a time, one-focus approach of it.

Plus, sweeping your hand across from the left side of the screen to switch between a text editor and a music player felt kind of cool. For a couple of days.

It's just that they've gone too minimal with this interface. They've out-Appled Apple--and as anyone who's looked for a delete key on an apple keyboard can attest, there's not much else you could cut from a Mac without losing functionality. I've spend ridiculous amounts of time trying to preform the simplest things in this interface. Like, how do I find out what folder an application is saving my files in? How do I change the display size of my text? And what fucking time is it?

(I've discovered the clock is just a swipe away, but c'mon. Would it have killed them to leave it in the corner of the screen?)

And then there's the quality of the apps. They're terrible. All of them.

"Evernote Touch's" simplified interface just about kills the feature of sorting and classifying your information--the main strength of the desktop application.  And it's buggy. Every time it syncs with the server it kicks the cursor down to the bottom of the page and seems to switch you from an editing to a read-only mode. And forget about preserving font settings between the Evernote Touch and Evernote for the desktop. It'll sync the notes, but switching between the versions wreaks havoc with font choices and even between-paragraph line spacing.

Video watching applications are loaded up with ads that clutter the screen and counter-intuitive controls. Granted I used the free apps, but why should I pay for something I can do on the desktop with VLC for free?

The Xbox music player (installed by default) worked fine at first, but when it realized I was missing a couple tracks off a particular album, it went online and streamed them. Then, because it was playing a song I didn't own, it blasted advertising at deafening volume through my headphones. I guess it's pretty cool that you can type in any song and hear it immediately for free, but the way it just went and did it without notifying me felt intrusive.

Finally, one of the core functions computers perform is opening, editing, and saving files. But here, every app's interface for doing this is different, counterintuitive, and frustrating. Again, the impulse to keep the interface childishly simple just doesn't work when you have to navigate a computer chock-full of files. There's no easy way for selecting groups of files on a touchscreen, either.

So I've found myself switching over to the standard desktop again and again, until I realized I hadn't worked in the Metro interface at all in weeks. Why would I, when standard, free open source desktop applications did every single job so easily.

The laptop works great, and by ignoring all that new stuff it's given me just what I wanted: a nimble PC that doesn't get bogged down by today's crap-happy internet. But as for Windows' grand experiment with this new interface, nothing "just works." It's extra maddening because the feel of the setup makes it seem like it should. I gave it another try today with a couple more apps from the store, a Youtube viewer-downloader and an e-book reader. They installed in seconds, but both required multiple launches after crashing. Then the downloader said it was saving a file in one format when it really used another. On the other hand, it did allow me to grab an mp3 of one of my favorite artists, eventually. Finding the file after saving it was the usual hassle, and involved leaving the app and performing a search from the desktop. The eBook reader somehow adhered to the minimalist design aesthetic while providing one of the ugliest interfaces around for navigating books. And while it displayed the text in a nice, distraction free layout, it anti-aliased it in weird fuzzy waves across the screen that had me checking my glasses.

Seriously, I haven't used consumer software this rough since the early 90s. It's like the developers just don't care.

So I'm wondering, is anyone else out there still giving the Metro interface a chance? And is anyone still developing for it? Microsoft still claims this is their future, and they’re not backing down—their latest update keeps the start menu off the desktop so you’re forced to pop back to Metro for lots of functions. But shopping through the app store feels like picking through a bargain bin of beat up old misfit toys. How are they planning on selling a system that nobody’s writing quality applications for?

There is so much good music out there that I don’t even know about yet. The last century was a particularly rich one for music, with a lot of experimentation going on. Markets don’t have the room for this sort of innovation, anymore.

This music, it feels like being a child again, and looking into unfamiliar rooms. Going through a long-forgotten attic. Encountering ancient family artefacts for the first time. Turning them over, rubbing off the dust, puzzling at the function. What is this old tool? Who did this belong to? A grandfather, great-aunt, distant family friend? What images does this antique camera contain? To what would you attach these brittle rubber hoses? It might have been a horror or a salve. It might be trying to forget its stories.

It’s been a long while since I’ve had the patience to just listen to music for it's own sake. Hindemith has broken me out of that funk. There are new harmonies that are unsettling as they are brilliant. Meditative spaces. 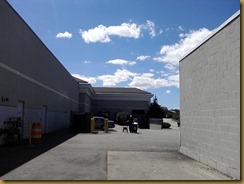 And the retro-technical implications of this water-meter complex, begrudgingly counting flow. 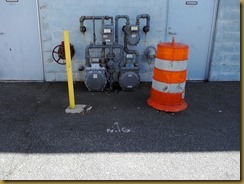 Grey clapboard and concrete cannot hold back such a brilliant sky. 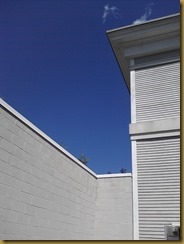 Nor can the symphony of these angles delay the onslaught of light and time. 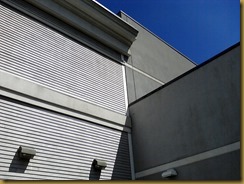 Sometimes all we can do is wait. 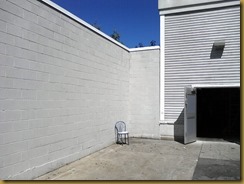 Even if the spaces were not built for us and do not want to hold us. 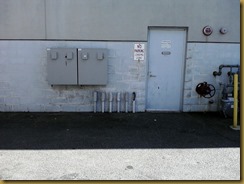 We’ll pass through nonetheless, in submission and defiance. 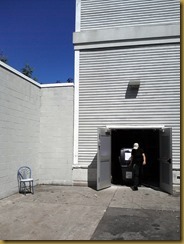