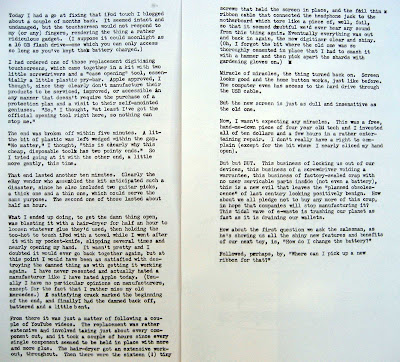 Egad, this last winter was hard. And cold. And long. The old house is drafty and the snows far too regular. The tires are bald and the shovel is rusty. Getting out of bed in the morning was an adventure in endurance, and getting to work felt like the voyage of the Endurance.

And now we're hammered with this heat wave. 101+ degrees today and enough humidity to sweat the paint off the car. I step outside and think, this feels freaking great!


The Wife wanted me to take a swim with her, but I couldn't. The water in the pool, which she insisted was comfortable, was just too bloody cold.

I just needed to hang out in the yard and be comfortable for a while.
Posted by Winston at 8:23 AM 1 comment:

Our Day In Court

For free entertainment, you could do worse than going to your district court on hearing day and watching the proceedings.

We weren't there for fun, although I was determined to enjoy the experience as much as one can. Obtaining an execution to evict a tenant who has not paid rent in four months isn't a pleasant experience, but at least it can be interesting.

This district court handles civil and criminal matters together on the same day. It wasn't what I was expecting, and it had me wondering if we were sitting in the right courtroom as docket after docket was called to the bench with "The Commonwealth Versus..." I kept leafing through our paperwork to satisfy myself that "Main Session Courtroom" had to mean this big one with the double doors in the center of the building, and that I had the date right. Our tenant wasn't there either, which added to my confusion. She turned up half an hour after the appointed time, which turned out to be early enough. The criminal matters ran on and on.

So here's a question: if you're summoned to court to appear before a judge because you're accused of shoplifting, say, or operating under the influence, or assaulting your sister ("We just don't get along..."), wouldn't you want to put something on besides flip-flops and baggy shorts and a ratty tee-shirt? Maybe, if you're on probation and one more offense means a mandatory 60 day stay in jail, you could cover the gang-letters tattooed down your forearms, or take off that baseball cap? I think the reason that cameras are forbidden in courthouses is so nobody ever has to see a picture of the doofus with the puffy sneakers, the sports jersey, and six inches of boxer shorts showing above his sagging swim-trunks.

"Good grief," I said to The Wife, "a third of the people in this room have neck tattoos."

She said, "That's how you know who the bad guys are."

Having never sat through criminal court proceedings before, it amazed me just how practiced and knowledgeable all the participants were. I'm not talking about the judges and the lawyers - of course they know what they're doing. But there wasn't one criminal defendant there who didn't know where to stand and what to say. Nobody seemed confused about their instructions to contact this probation department or that district attorney. Public defenders were appointed, phone numbers were exchanged, dates were set for further hearings...it was like watching a dance and trying to figure out the moves. I realized that there really are two classes of people in this country: those who regularly participate in the criminal court system and those who don't.

Things sped up when the judge switched over to civil matters. It turned out all the civil cases were about deadbeat tenants and unpaid landlords. I was nervous when my name was called, but I didn't even have to open my mouth. The judge asked our tenant if she owed the rent and she said, "Well...yeah..." and he actually laughed and sent us to mediation.

Later, outside the courtroom, waiting for the mediator, we saw some tenants (not ours) who had just been complaining to the judge that they didn't have money to feed their kid, never mind move out and rent a new place. Out here, they were showing off new tattoos to their buddies. One on the shoulder, one on the back, one on the leg. Who did they go to and how much did it hurt? Talking shop, sharing the hobby of self mutilation.

The result for us? Well, it seems senseless to talk about "winning" or "losing" in this situation, but let's just say that we have reached an "agreement." And we've got a piece of paper to take to the Sheriff's office in case anyone thinks about changing their mind.

And we also got to watch a couple hours of our court system in action, which was more interesting than I expected.
Posted by Winston at 3:35 PM 6 comments:

It doesn't take long, after a shift, for some of the women I work with to get into trouble.

Today's women behave like yesterday's sailors: they work so hard just to blow their pay in a few quick hours of bad decisions and terrible behavior. Then they get up the next day to haul themselves back to work for more service to The Man.

They may not spend months at sea harpooning whales or pulling up nets. They discard their lives in shorter-interval mistakes which usually have greater consequences.

We were programmed by evolution to be stupid, impatient, and rash. The gene-pool does not reward the patient, the thoughtful, or the careful. Women used to be a civilizing force, doing what they could to temper the stupid of the human race. They were the ones who had to live with most of the consequences. This doesn't seem to be the case, any more. Either that, or they have been sold on the idea that the consequences are actually rewards.

Then again, it seems many of the people who have the most satisfying lives are the ones who started off stupid and then came to terms with their "mistakes."

The question, I suppose, is at what age do you have to start getting smart?
Posted by Winston at 9:00 AM 2 comments:

Neither Hoarding, Nor Collecting

When we were at the dump swap-shop the other day, getting rid of three loads of dusty and undesirable goods, I watched a man step out of a car right in front of me with a Smith Corona typewriter case and deposit it on the floor, free for the taking. Unable to resist, I opened it up to tinker and test, and found that it was clean, little used, and almost factory fresh shiny.

Only problem was the carriage mechanism, which pulled all the way to the left and would not stop, so that it took a bit of finagling to close the case again.

Still, I was tempted. Surely it had to be an easy fix, something I could piece together again in the back yard of an afternoon with my swiss army knife and my determination.

But then I remembered all the typewriters that have already, and recalled our purpose for visiting the dump: to reduce our quantity of stuff. My plan for the typewriters I have is to cart them all up to Cambridge Typewriter and beg Tom to trade them all in for one shiny, well maintained, and portable machine. Everything I've got works well as-is and could just use a bit of adjustment and lubrication, so I'm really happy to come out behind on the deal so long as I come out lighter. It seemed like adding one more maybe-functional machine to the pile would be pushing my luck.

Even the price of free was too high.

It struck me that my collecting days are well and truly over. After months of cleaning, yard-selling, and hauling the accumulated crap of three households out of our barn, I'm really, really happy to be through with collecting.

Which makes me all the more grateful for the type-o-sphere. You all have such lovely machines. It's such a pleasure to look at them.

Another bit of ephemera from the family box of old documents. 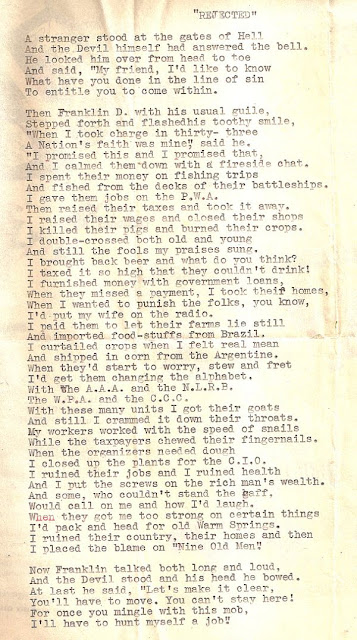 I'm not as up on my historical presidential politics as I would like to be, but a quick googling of the Nine Old Men makes me think this document has been sitting around since the 1930s. Which makes the age of my previous typecast suddenly likely to be a bit greater.
It seems my ancestors were opposed to the New Deal. Again, I'm not sure if this was composed by some ancestor, or just copied out of a newspaper or magazine. I like that the level of political discourse is such that you couldn't fit it on a bumper sticker (or several) though.
Posted by Winston at 6:38 PM 1 comment: