Seeking Solitude? Read An Island to Oneself

My recent thoughts on quiet and solitude have more than a little to do with this book I finished recently, An Island to Oneself. It looks like there are still a few copies available on Amazon--mostly used. I bought one for my mother to read last winter in while she was stuck on a boat in Florida. Apparently it was passed around the docks and read three or four times that season. I got my shot at it just recently and have since given it back, so I can't quote it as extensively as I'd have liked. But I found it's the sort of book that sticks with you, and I can understand why it's developed such a cult following.

This Tom Neale fellow, he spent 16 years of his life as the only man on an isolated atoll of the Cook Islands, over 200 miles from the nearest human beings. Years would go by between visitors. And he chose this life. When a couple of Navy helicopters landed there as part of a training exercise, the pilots were shocked to see him. "Thank goodness we found you. Now we can take you home."

But Neale said, "I live here!"

Neale's stamina and resourcefulness are just as impressive as his desire for solitude. He was in his 50s when he spent his first stint on the island, and he set about repairing and lashing down a WWII lookout shed, patching a boat, transplanting topsoil to grow a garden, slaying wild pigs, penning and breeding chickens--not to mention spear-fishing and harvesting coconuts every day to sustain himself.

This book covers his first two stays on the island, totaling six years. Wikipedia tells me that, thanks to the proceeds from this book, he went back for another ten, returning to civilization only at the age of 75 when he fell ill with stomach cancer.

I wonder if a man could do such a thing today. Neale certainly didn't own the island, but as it was well outside the boundaries of any shipping lanes, nobody came around to stop him. There is no discussion in the book about titles or deeds or property rights, and the only money he spent was what he paid a captain to drop him off there.

But nobody stopped him when a friend offered to ferry him and his supplies back over. (They brought him and his supplies in a 30' sailing vessel. I can't help but reflect that this is the length of my sailboat.) There is something touching about his government's concern and the way they handled it: worried enough to officially register displeasure, but taking no action to stop him.

Reading the book, it's easy to see how a year could turn into 16. How, in fact, one could spend an entire season of one's life fishing and building and watching the sunsets, and have it all pass in a sort of dream. The hard work, the daily rituals, the satisfaction of addressing life-or-death challenges and working out solutions with your hands, and with the tools you had the foresight to bring with you. His island was a fragile place and dangerous enough, but it was bountiful and somewhat forgiving. The weather (aside from the storms) was mild, and the scenery stunning. Who needs the noise of the world when they have all this?

The book is not a great book. It's not deep, philosophical, or challenging. It's not even that much of an adventure yarn, come to think of it. It's more of a travelogue, building on the practical, almost mundane details of how one man was able to survive, and thrive, on a desert island by himself. And I think it's the mundane nature of these details that makes this so compelling. Here are the tools he brought. Here is how he transported his topsoil. Here is how he pollinated his vegetables. Here is how he baked uto out of fermented coconuts. From such small tasks was built a life of his own choosing--even if it took him fifty years to figure out how to get there.

By the end of this book I found that a surprising stretch of my mental landscape had been set aside for this atoll, and I find myself wondering what I'm going to do to reach my own, and how I'm going to survive once I get there.

There are significant details in Tom Neale's life which the book omits. I found these on-line after reading the book, and so will put them below a hash mark in case you feel they may impact your own experience of reading the book first. (Or scroll to the very bottom for a link to read the whole thing on-line.)

The book makes no mention of the wife or the two children he fathered between his first and second visits. (Today his son is actually a coach for the Cook Islands Olympic sailing team.) It passes over this period with a chapter discussing the drudgery of "Six Frustrating Years" of working and scheming to get back to his island again. How his family factored into his adventures I don't know. I wonder what his children thought of their absent, eccentric father. There are pictures of them on the island on-line. (I can't seem to find them again now, sorry.) Maybe they spent part of his last stay there with him.

I suspect he was not entirely the sort of good-natured character he portrays himself to be in his pages. and apparently some of the Rarotongans who knew him claimed he was so cantankerous that a desert island was the only place that would put up with him. There is also speculation that the book was ghost written.

But who cares? Here is someone who lived a a great portion of his life on his own terms.

Here is the Wikipedia page on Tom Neale.

And one on Suwarrow Atoll.

And gosh, it looks like you can read the whole darn thing on-line. If reading a book-in-browser isn't your thing, at least you can give it a start to see if you like it before tracking down one of those lovely hard-to-find hardcovers from Ox Bow Press (1990).
Posted by Winston at 10:22 PM 1 comment:

The Pull of the Perfect Moment 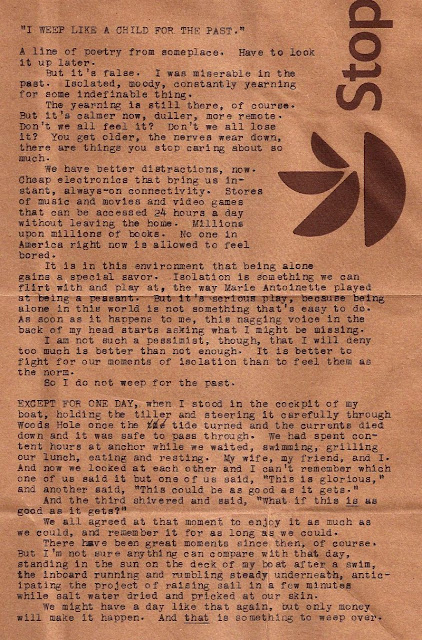 Typewriter Insurgency Versus The Spreadsheet - Part 3 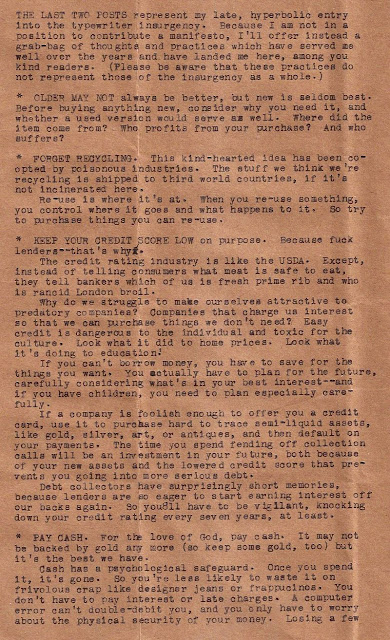 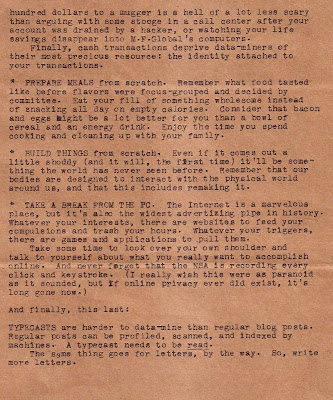 Here's an article from Wired Magazine about that NSA data center.

Typewriter Insurgency Versus The Spreadsheet - Part 2 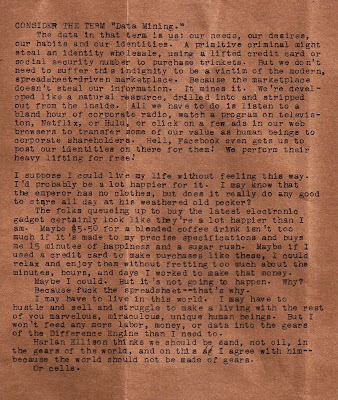 Typewriter Insurgency Versus The Spreadsheet - Part 1

Not speaking for the insurgency as a whole, of course (after all, it has "no leader, no dogma, and no program.") Still and all, am I presuming too much if I assume these sentiments are shared? 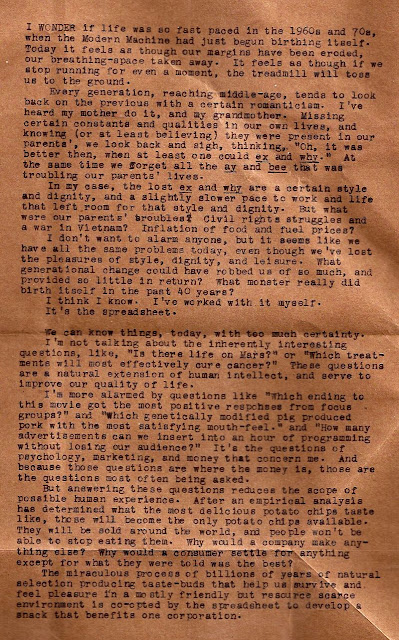 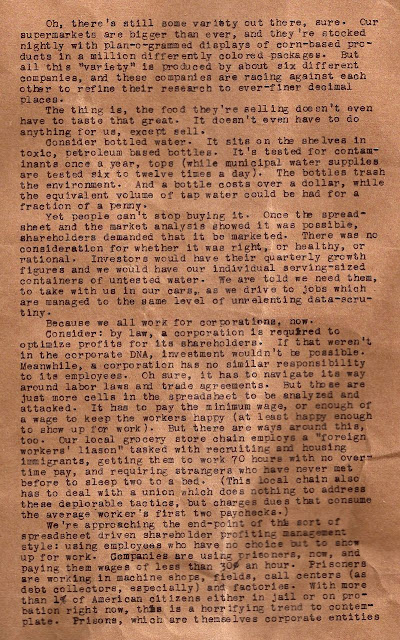 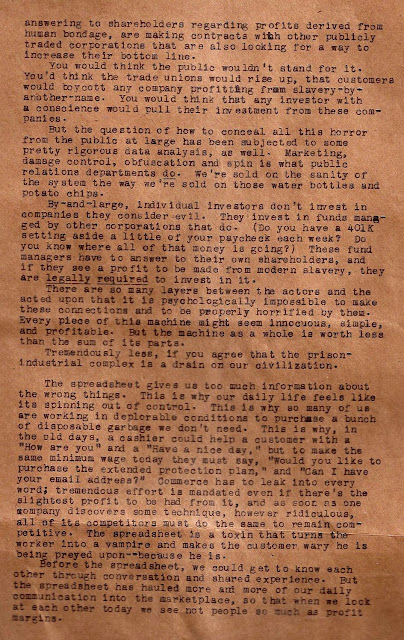 No water comes in at all during light to moderate rainfall.

Earlier in the week we had a real soaker, though, and we had a pretty steady drip from one area of the ceiling. I was discouraged, until The Wife pointed out that this was a vast improvement over the previous major storm's. That time, water came down in about eight places, running down the walls and forming blisters in the paint along the ceiling. We didn't have enough buckets and towels to catch it all.

This time we only had to put down one bowl.

During the recent rain, I went up on the roof and got a pretty good idea of where the water was still coming in. When things dry out again I'll run a bead of tar along the seam and see if things improve further.


#
Someone at work asked me how I knew how to do all these projects I'm always taking on. I told them I don't. I read a little, then just make it up as I go along and try to find ways to fail that won't kill me. (If the roof still leaks, I can try again. If I fall off the roof...)

Sometimes the repairs even work. These are the ones I try to repeat.

Put another way: I am confident that there's nothing out there which I can't succeed in doing poorly at least part of the time.
Posted by Winston at 10:25 AM 14 comments:

This is why I can't write fiction anymore. Because my real life is so horrifyingly mutherfucking interesting.
1 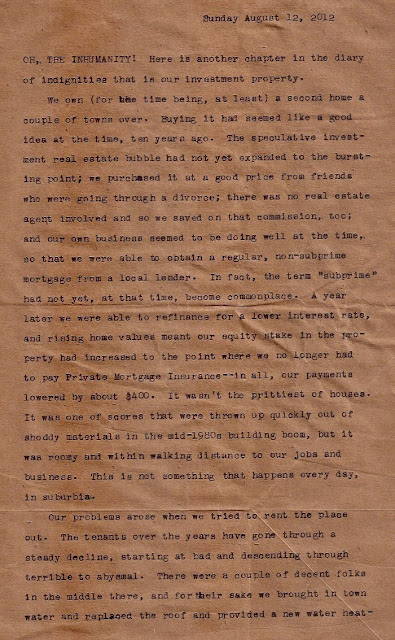 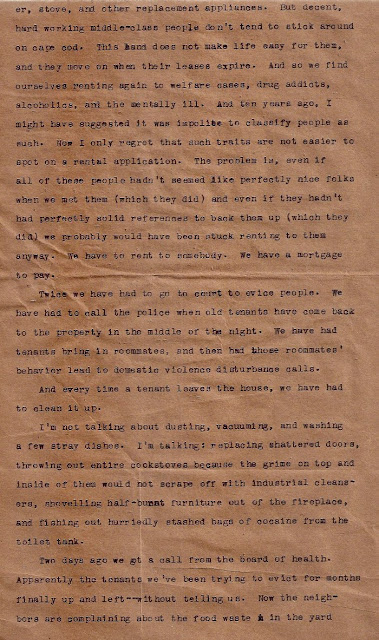 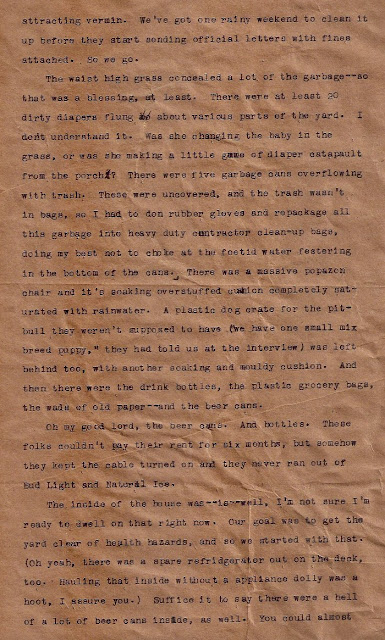 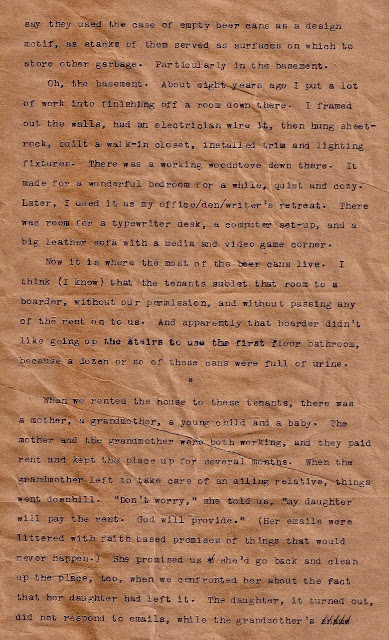 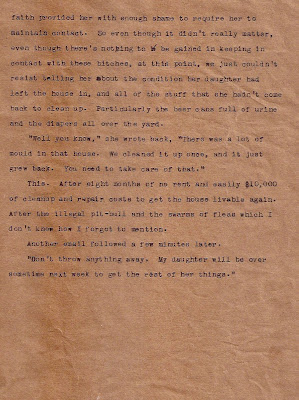 All posted in unedited rough draft because I don't really have the energy to live through this again. I'm not honestly sure why I feel compelled to share it, except that the act of typing is thereapeutic.


I'll tell you this for nothing, though: I'm sick of struggling to be a part of the middle class. The assholes who keep trashing my house may live in filth, but they have an easier time of it. That bitch was high and drunk every time we stopped by. Then on top of welfare she got full health care provided for herself and her babies.

Meanwhile, my doctor tells me I need to get a CT-scan for some discomfort in my liver, and I'm looking at $4000 in uncovered expenses on top of the health care premium the state of Massachusetts says I need to have deducted from my paycheck every week.

Maybe I can cash in all those empty beer cans for medical care.

Fuck that. I'll just quit drinking and save twice the fucking money.
Posted by Winston at 11:59 AM 6 comments:

There are times when I actually like listening to highly processed, electronic, atmospheric music. Particularly when I'm writing, or doing something where I just want some background noise to set a mood.

There's something to be said for the moody and ethereal -

As well as the optimistic and ebullient -

But I can only take so much of this unbridled electronic energy. Too much of it and I start to feel drained, hollow, and unfulfilled. I feel like Bilbo Baggins after he held on to the ring too long: "thin, sort of stretched, like butter scraped across too much bread."

And I have to return to voice, vision, and talent.

Nothing restoreth the soul like some Nick Drake. A boy who died at 26, two years before I was born, leaving behind too few perfect gems of lyric and melody. Sparely composed and simply performed, the tracks are just long enough to share their message and then get out of the way, doing their quiet work on your memory.

I've taken to playing him in the office in the mornings, when I'm doing paperwork. No one on the staff has complained. Before a particularly stressful day of customer service and corporate shenanigans, he reminds me that there can be a meaning to song, and it doesn't have to be pure product.

And that the day's struggles are temporary, even though the truest poetry endures.
Posted by Winston at 9:10 PM 3 comments:

Patching a Roof Leak - Or Trying 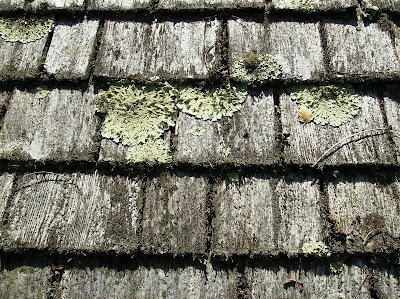 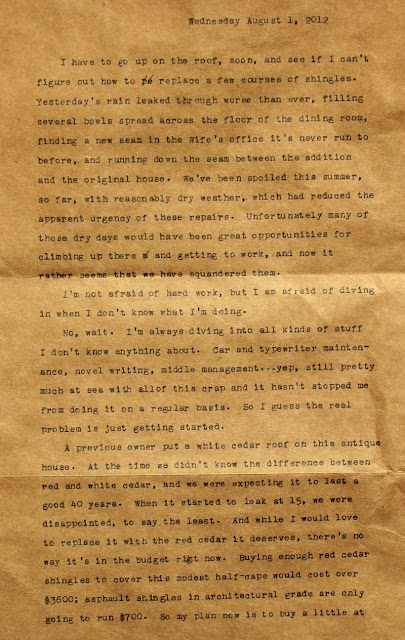 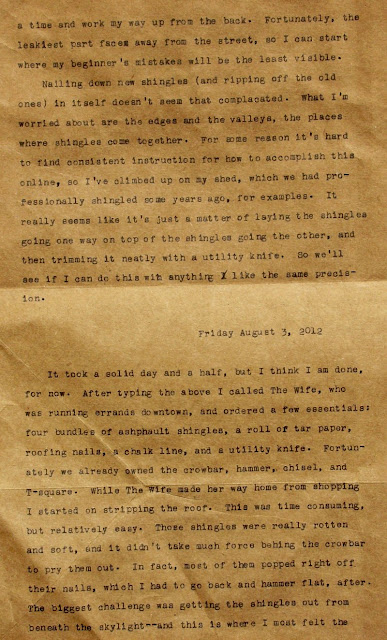 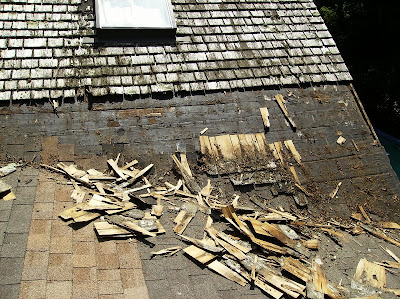 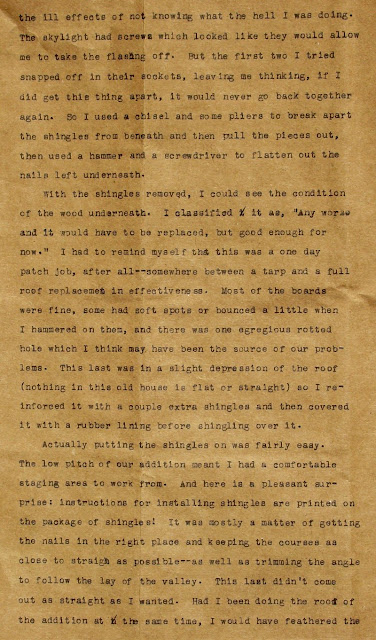 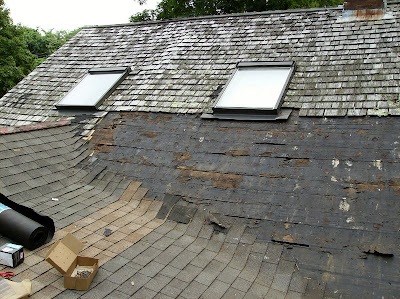 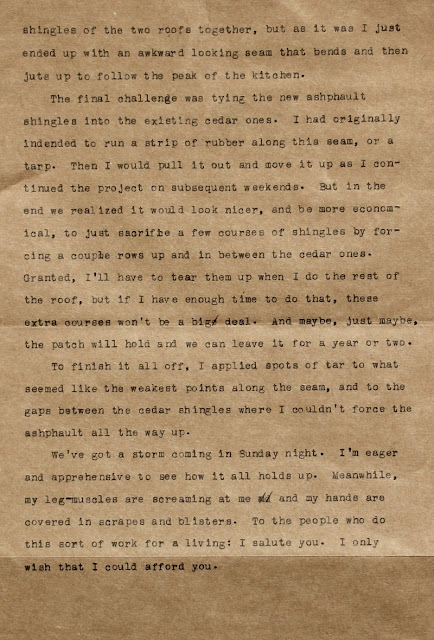 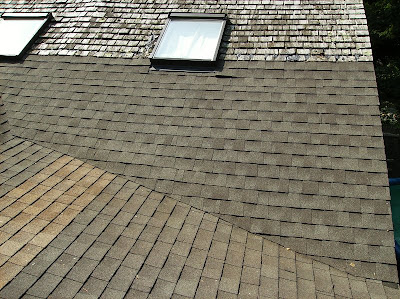 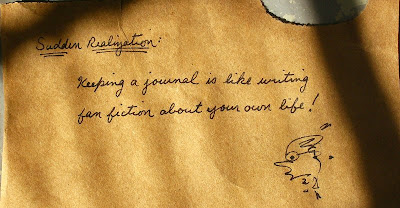